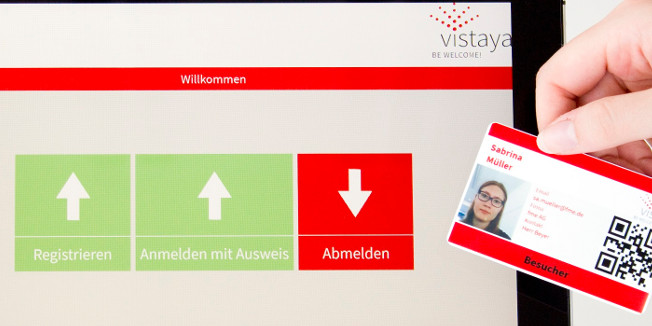 The first two field reports of my fellow apprentices have already given you some insights into the apprenticeship here @fme. They described our first coding tasks, databases and object oriented programming. However, we learn a lot more than that. I want to talk about our own apprentice project vistaya, explain what vistaya is, how we were introduced to vistaya and what our current responsibilities are.

When we first heard about vistaya, it did not mean anything to us. We were allowed to try the app ourselves and were really impressed.
Marc Zobec, a former apprentice at fme, had the idea to develop a registration app for a visitor management system. As part of his final project, he developed the first version of vistaya as an iOS version for iPads. You can still find this prototype at our headquarter here in Brunswick.

It soon became clear: this app does really help our reception team! Our lovely reception women could be disburdened and now have more time for other things. Even a lot of the visitors were interested into the app and asked if they could buy the software. As a result of that vistaya became a full apprentice project. Currently apprentices from the first and second year of apprenticeship are working on it.

Our induction began with a short introduction from the second year of apprenticeship. We were surprised to hear that they were even allowed to lead client meetings in their first year of apprenticeship already. The following week they had a presentation for a potential client scheduled. Another apprentice and I were offered the opportunity to sit in and listen to the meeting. In additional meetings, we learned more about vistaya, practiced how to present the app and were shown how to edit the corresponding vistaya website. We took over more and more responsibilities and were allowed to hold our first client presentation and present the app to an interested company.

Our current responsibilities are as diverse as the apprenticeship @fme. For one thing, we hold presentations and show interested companies our app, write emails and answer our client’s questions. On the other hand, we record suggestions and improve the app and add new features. Furthermore, we have designed the new vistaya website.

It is often thought, that programmers do only code. That is a very outdated picture from the daily life of a programmer. We still code a lot, but we also do presentations in front of clients, communicate with them and analyze what their wishes are. I am glad, that the apprenticeship @fme is not as “dry” as you would typically think and I am allowed to gain client experience from early on. By now, it is getting a lot easier for me to hold presentations.