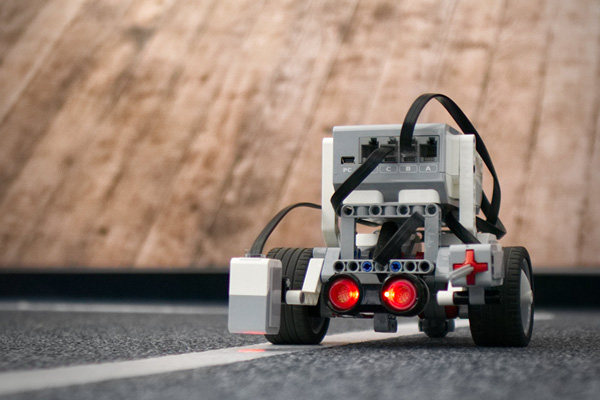 It is the 08th of July 2019 at 7:30 o'clock. At fme AG’s office in Brunswick, everything looks like it is going to be a normal Monday morning. The first employees are making themselves comfortable at their workplaces and trying to dispel their tiredness with a hot cup of coffee. Some people wonder about the whereabouts of the dishes and cutlery before going back to their desks to turn on the computer. But the supposed calm is deceptive. Because this week shouldn't be an ordinary one.

Hardly an hour has passed and suddenly the company becomes lively. Within minutes, 16 children storm the building. Laughing and screaming, they run through the staircase and gather in the meeting rooms on the upper floor. There they form teams and play tricky games together. A little later, they move on and spread out in the offices on the first floor, where they will spend the next few days.

The children enthusiastically dedicate themselves to new challenges. In this way, a heap of Lego parts quickly turns into robots. In the course of the week, logical sequences are programmed. The result are autonomous robots that orient themselves with the help of a wide variety of sensors in order to travel distances independently and master a multitude of tasks.
But as soon as the work has started it is time for a break again.

When it comes to lunch, everyone jumps up and storms towards the cellar. In dim light, everyone looks for a place at the long table of the old brewery. Hungry, everyone receives their meal and during the well-deserved refreshment, there is a loud exchange about the progress of the day and about the hottest topics in the area of technology and video games. 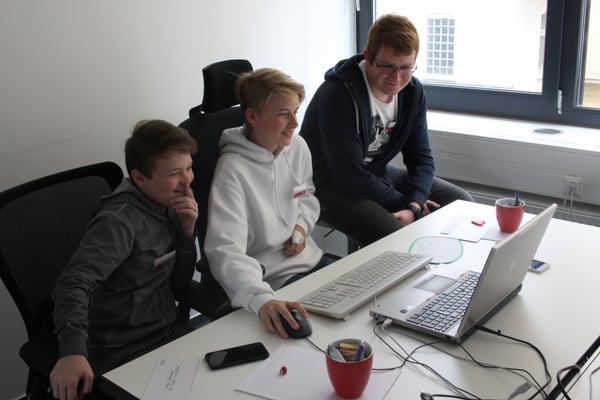 And it continues excitingly: With a little practice, everyone gains the freedom to create their own individual mobile phone app. Design and user-friendliness are just as important as functionality and program logic. The result is promising: Versatile and challenging games such as "Whack-a-mole" or "Dodge It" are created. And whenever someone is not programming, he has the challenge to beat the high score in another team's game.

Boredom is nothing to worry about because the afternoons are even more eventful. Equipped with mobile phones, the teams search every corner of the building for hidden clues. However, finding them isn't enough if you can't solve the puzzle. It is discussed and puzzled. No employee is safe from questions like "Where is Danbury?" or "Is there a football field here? 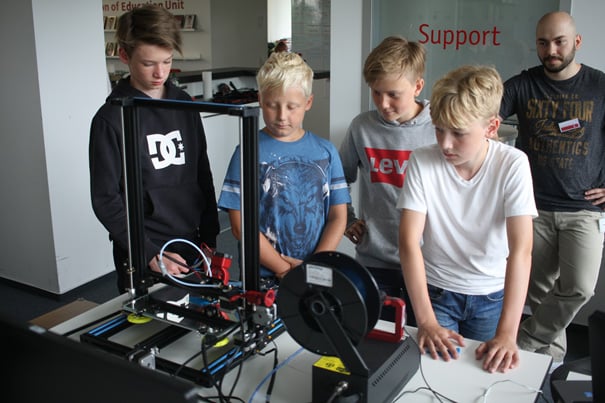 It's also impressive how a 3D object can be created from a roll of plastic filament if you've mastered the programs that are necessary for it. The endless possibilities that result from this lead to fantastic ideas and many conversations among the children.

In teams of two, the children are led one after the other into an office. It's all full of monitors and the posters on the walls testify to a passion for video games and fictional worlds. From here, they travel to fascinating virtual realities that every child can try out. A unique experience made possible by state-of-the-art technology combined with intelligent software.

Throughout the week, a group of eight young adults accompanies them. Some of them are currently in their education and have a special passion for computer science, others come in their free time to participate in this event. What they all have in common is their enthusiasm for the idea of getting the next generation excited about IT topics.

And suddenly it's Friday. The week flew by. The robots are quickly calibrated to the current conditions and the last error in the app is eliminated. Because today it gets serious. After an exciting welcoming speech, everyone is ready. Each team presents its app to a large audience. In addition to the live demo, the young programmers also discuss the goals and difficulties involved in creating an app. And not without stage fright, because the jury makes its notes conscientiously. It will come together after the presentations to announce a winner after extensive discussion.

But before that, epic robot races are held in front of the impressed parents. The Lego robots are almost identical in construction and so the different programs play a decisive role. The team with the fastest robot wins. However, not only speed is important, but also high precision. While the robots drive through the course, the tension is written all over the faces of the participants. The teams go through a roller coaster ride of emotions. In one moment, there is frustration and disappointment, in the next, there is laughter and cheering.

Once everyone gathered at their place again, the winners of the competitions are honored with thunderous applause. Afterward, the participants will step in front of the applauding audience, receive their certificate and celebrate the end of this very special week. And how better to celebrate such an occasion than with a hot bratwurst from the barbecue and with enjoyable conversations between parents, participants and organizers.